This album was Hosted by DJ Symphony of Wu-Tang and originally released as an iTunes exclusive (Click HERE) – Nino Graye revamped the album and re-released it independently through his Flow-4Ever brand name. 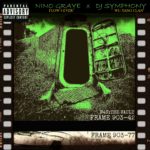