This Silis & Yodaroc album was inspired by the snail crawling on the edge of a straight razor and surviving line from the movie Apocalypse Now, they thought it was the perfect quote to base an entire album on. With times as they are Silis & Yodaroc wanted to vent and be as authentic as possible, reflecting how some people feel about today. “We wanted to be as serious as possible and have every song sound like they go together because we feel that albums nowadays miss that and at the same time we didn’t want to depress people but have them agree while also maybe making people crack a smile with some of the things we say.” #silis #yodaroc #andsurviving #culturepower45 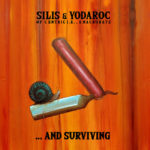